One of the main reasons why car batteries die is because of corrosion. Battery acid will leak out at the connectors, then harden and reduce the amount of contact between terminals and connecting points. This reduces the battery’s ability to recharge via your vehicle’s alternator.

Battery corrosion will be quite visible to the naked eye; the terminals will have blue-green powder caked on them. In some instances, cleaning your car battery terminals with a dry rag of toothbrush can extend the life of the battery. However, it’s usually best to consider buying a new battery, just to be safe. 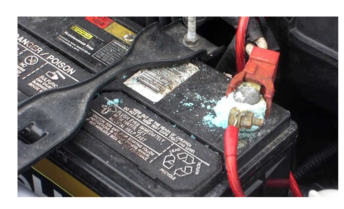 Car batteries are notoriously fickle. It doesn’t take much for them to go bad, and they usually only live for 3-5 years before needing to be replaced. But when they die, they do so in glorious fashion....Like when you’re already running 20 minutes late to work :-(

Fortunately, there are numerous, unmistakable signs that your car battery is on the verge of failing. Here are the 10 most common symptoms of a dying vehicle battery:

Exposed to cold temperatures for an extended period, car batteries are more likely to fail prematurely. At 32 degrees Fahrenheit, car batteries will be up to 35% weaker than normal, but they’ll also try to act like they’re functioning at 100% efficiency. This will cause the batteries to permanently weaken over time, until it fails completely.

If your battery freezes entirely, it could be “electrically dead.” This is almost certainly a problem that can’t be repaired or recharged, so you’ll likely need to buy a new one.

If you attempt to start your car and then open the hood, you may smell something similar to rotten eggs or sulfur. This is a typical sign of a leaking battery, which can be caused by old age, external damage to the battery terminals or case, or an internal short-circuit. A visit to Stevens Battery Warehouse is the next step.

Extreme heat or cold will force your battery case to take on unfamiliar shapes. They may bulge and swell – this can be dangerous! – or crack, leaking battery acid out. Any battery that’s not rectangularly shaped should be properly discarded (i.e. recycled – ask Stevens Battery Warehouse to help you recycle your old car battery).

Most car batteries, with the exception of electric vehicle batteries, will only live for three to five years, depending on driving conditions and weather. Do you remember the last time you replaced yours? Check the battery’s manufactured date on the case; If it’s been at least four years since the battery was built, have it tested at Stevens Battery Warehouse for FREE!  And NO APPOINTMENT IS NECESSARY!!

The “Check Engine” light is a catch-all warning telling you something is wrong – not necessarily something related to your battery. However, it’s not uncommon for the issue to stem from a bad car battery. When you bring your vehicle to Stevens Battery Warehouse they’ll test the battery for FREE.

Your car engine should kick into action almost instantly. If it’s slow to start – meaning it stutters before turning over – the issue could be related to your battery, alternator or starter.

A car engine that doesn’t turn over at all is a larger issue than a slow-to-start engine. Sometimes the engine will click repeatedly while it cranks to life, which signals that there is no or a limited amount of power being supplied by the battery.

Your car’s headlights will appear duller and dimmer than normal if there’s not enough power available to keep them on. You’ll sometimes notice your headlamps adjust brightness randomly or simply not work at all.

Radios, dashboard lights, windshield wipers, and power window controls will go to Wonkytown when the battery is dying. Essentially, any electrical component, feature or function that isn’t working properly could be failing because the car battery is on its last legs.